With the spread of COVID-19 leaving people across the world less connected, social isolation and loneliness are more acute. But it’s during these times that we need a sense of community more than ever and to explore new ways and reasons for people to connect with one another.

According to a report released by Relationships Australia in late 2018, most Australians will experience loneliness at some point in their lives. That same year, The Australian Loneliness Report found that one in four people were experiencing an episode of loneliness, while one in two people reported they felt lonely for at least one day each week. Since these reports were released, the world has become even more disconnected with the onset of the global pandemic, to a point where social distancing is mandated and enforced, and at times we’re legally required to completely stay away from others. 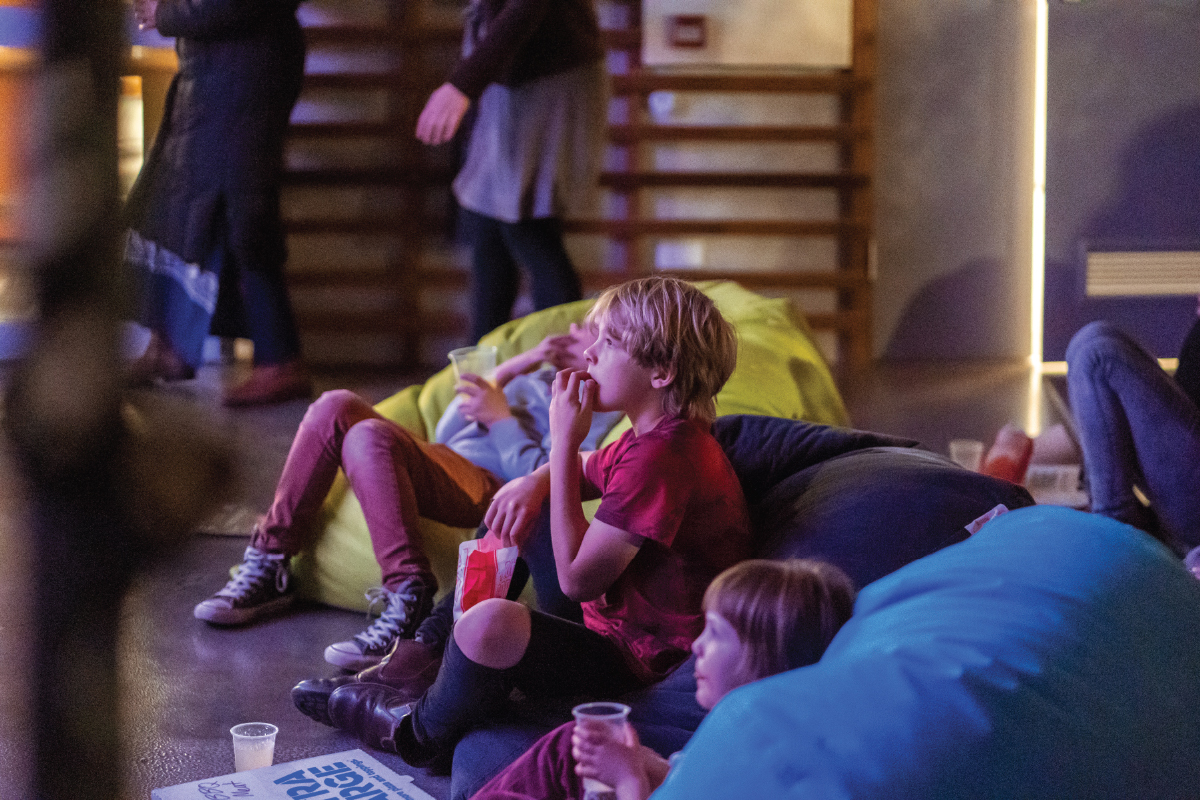 “Loneliness is a really significant issue across Australia, and indeed, across a lot of the world at the moment,” says Nick Tebbey from Relationships Australia. “There are reports out there that liken loneliness to smoking 15 cigarettes a day in terms of the morbidity risk that it can create for a person. So it does have really significant impacts for us as individuals.” “However there have been some real concerted efforts to start looking at ways of addressing it,” Nick adds.

“What we’ve seen over the last 18 months is that strong social connections really do provide a sense of support for us when we’re going through tough times. So there’s a real unifying thing when there’s a natural disaster—or as we’re seeing right now, a pandemic—when people get together and look out for each other, support each other, and support the most vulnerable in their communities,” says Nick.

“We know that this then has lasting consequences for a community that then can turn to each other when they need it in the future. A really important benefit of having strong social connections is having somewhere to go for that support when you need it. And the other benefit, which certainly some of our own research tells us, is that the more we feel like we identify with our community and the people around us, and the more we’re connected with them, there’s actually direct mental health benefits, and a reduction in things like loneliness, and social isolation. So connection can have really positive impacts on our health, as well as just that broader sense of support.”

“It can start with really simple things, like just saying hello, and stopping for a chat, when you pass your neighbours in the street or over the fence. Just generally having conversations like that can open up a whole lot of doors.”

CREATING COMMUNITIES THAT FOSTER A SENSE OF COMMUNITY

One of the factors that can play a huge role in whether or not we feel connected is the community in which we live. In the initial designs for the emerging Ginninderry region, infrastructure was incorporated in ways that helped encourage people to head outside.

“We deliberately tried to keep our streets pedestrian-friendly, to make sure kids can actually get outside and play safely with good routes to the park. Then we’ve included community hubs, which are natural spaces that exist outside the home where people might be drawn together, like parks, ponds or viewpoints,” says Tulitha King, Ginninderry’s Community Development Manager.

“By having community amenities situated throughout the suburb, it creates accidental occasions for interaction, which provide a chance for people to build community on their own terms which is slow and organic. And I think that’s really, really important, and people often feel more comfortable doing it in that way.”

Creating appealing neighbourhoods also helps give people a sense of place and a feeling of belonging. “Your street might not mean a lot to you. But if you have a relationship with your neighbour, and the kids who live down the road, and the guy who walks by with his dog every day, it makes you feel at home,” says Tulitha.

“And I think it contributes as well to your physical health, because if you feel safe in a community, you’re more likely to get outside and be active outside as well. And it contributes to your purpose in life, as well—it gives you the platform to develop as a human being.”Tulitha says community is the software that then makes places tick, and urban planning goes a long way to ensure it thrives.

“Communities can be extremely diverse, and healthy communities can each look very different, just as people are all different. The trick is to understand what kinds of people, cultures and interests are represented in a community and develop these assets to achieve a cultural blend that defines that community’s place. The community can drive this itself, however, these days when many family homes are very busy, professional support and an authorising environment do need to be provided to encourage communities to create their own cultural landscapes together,” she says.

CONNECTING PEOPLE AT A TIME OF DISCONNECTION

But of course, we could all do with a little encouragement individually when it comes to connecting. The Ginninderry team has also launched a number of community programs and events as an avenue for neighbours to connect, including movie nights, a playgroup, communal gardens, sustainability workshops, yoga classes, and the With One Voice choir, which was launched three years ago.

“There are actually studies to show that singing together builds relationships quite quickly, because singing is quite a vulnerable thing to do. So if you’re doing that with a group of people, it’s almost like you’re just letting your guard down instantly,” says Tulitha.

“And then there’s our playgroup, and people bond very readily over the challenges of child rearing. So it’s really important to provide that supportive environment for parents and carers of children.” At a more overarching level, the ACT Government has introduced a number of initiatives to increase community connection and combat loneliness and isolation. To help counteract the isolating effects of the pandemic in particular, they released Community Connections Grants as part of their COVID-19 Stimulus Community Resilience and Crisis Response initiative, plus Seniors Grants and Disability Inclusion Grants. The grants supported groups and individuals to run innovative projects that foster involvement, participation and connection.

Minister for Mental Health and Assistant Minister for Families and Community Services Emma Davidson says the grants were, “to try and help people stay connected during a time when they can’t all just go and do the things that they used to do”. “The really interesting thing has been seeing the community spring up and start implementing their own solutions. Through things like the grants programs, small groups have been able to fund a small local activity that allows people to reconnect with each other. [This] has been really important because it’s led by the community, and that’s how we’re going to get through all of this, by doing these things together.”

Some of the activities included trapeze workshops for over-50s, an Intergenerational Pen Pal Project where primary school students and a group of elderly residents connected by putting pen to paper, and a group who produced their own small community theatre performance telling the stories of how people are getting through this tough time.

HOW TO BUILD CONNECTIONS

“Some of the things that we’ve seen, certainly over the last 18 months, are neighbourhoods doing things differently, but really coming together in ways that I think are quite inspiring. So they set up neighbourhood WhatsApp groups or Facebook groups where they share what’s going on in the neighbourhood, or where they offer to grab someone some groceries if they’re isolating or in quarantine, and they’ve organised events when they could.”

If you feel you need a reason to reach out, use Neighbour Day as your cue. The annual event, which has been running in some form for 20 years and was held on March 28 this year, encourages people to connect with their neighbours, whether near, far, or online. The event’s website (neighbourday.org) has a range of ideas on how to reach out to those around you and ways to build a connection at any time of the year, and Nick says don’t be afraid to get creative.

“If we’ve learned anything over the last year, it’s that it’s about being creative in the way you connect, and not letting some of these really difficult things that are happening around us and that are limiting what we can do get in the way of making connections. We saw last year this huge uptake in people looking for creative ways that they could be connected via, like having trivia nights over Skype and things like that,” says Nick.

“There’s a lot of uncertainty still around us, we don’t know how long we’re going to be dealing with them. So taking that effort, being creative, and really building on those connections with your neighbours puts in place a really strong groundwork for years to come, which is really important for our mental and our physical health.”

Tulitha says we can all play a big role in growing not only our own personal connections, but those in the greater communities around us.

“I think there’s sometimes this notion that the government will fix things. I like the idea of encouraging people to do their bit to really feel like they belong, where they live, and to make it their home; not just their yard and their house, but also the streets where they live,” she says.

“At Christmas time, we had a couple of Christmas parties in the streets, and those sorts of things are wonderful, because it means that people feel comfortable taking ownership of a public space and claiming it for the community. We also have a local young man who set up a local soccer friendly competition every Sunday night. Those types of activities are about communities owning that public space and bringing their flavour into it and making it about the actual community that lives there. That public space becomes about them, and it tells their story.”

“The more we feel like we identify with our community and the people around us, and the more we’re connected with them, the better the mental health benefits.”

Bike to the future: Why e-bikes are taking over Canberra’s bike paths

A constant connection to country