On 2 June 2021 Paul Costigan of CityNews.com.au published an article under the headline: “Government fails own development rhetoric”.

While Ginninderry, a Joint Venture between the ACT Government and Riverview Developments Pty Ltd, is not specifically named, there is a strong inference that Costigan is referring to the project due to references to the government’s partnership and the Ginninderry Conservation Trust. As such, Ginninderry felt it appropriate to directly address the article given it may be open to misinterpretation.

The online version of the opinion piece from Costigan opens with a photograph used to seemingly illustrate undesirable elements of Ginninderry (pictured below). This is actually a photograph of the neighbouring development of Ginninderra Estate, a private development that is not controlled by Riverview Projects (ACT) Pty Ltd which represents the Ginninderry Joint Venture. Ginninderra was rezoned and developed separately and earlier than Ginninderry by an unrelated developer. 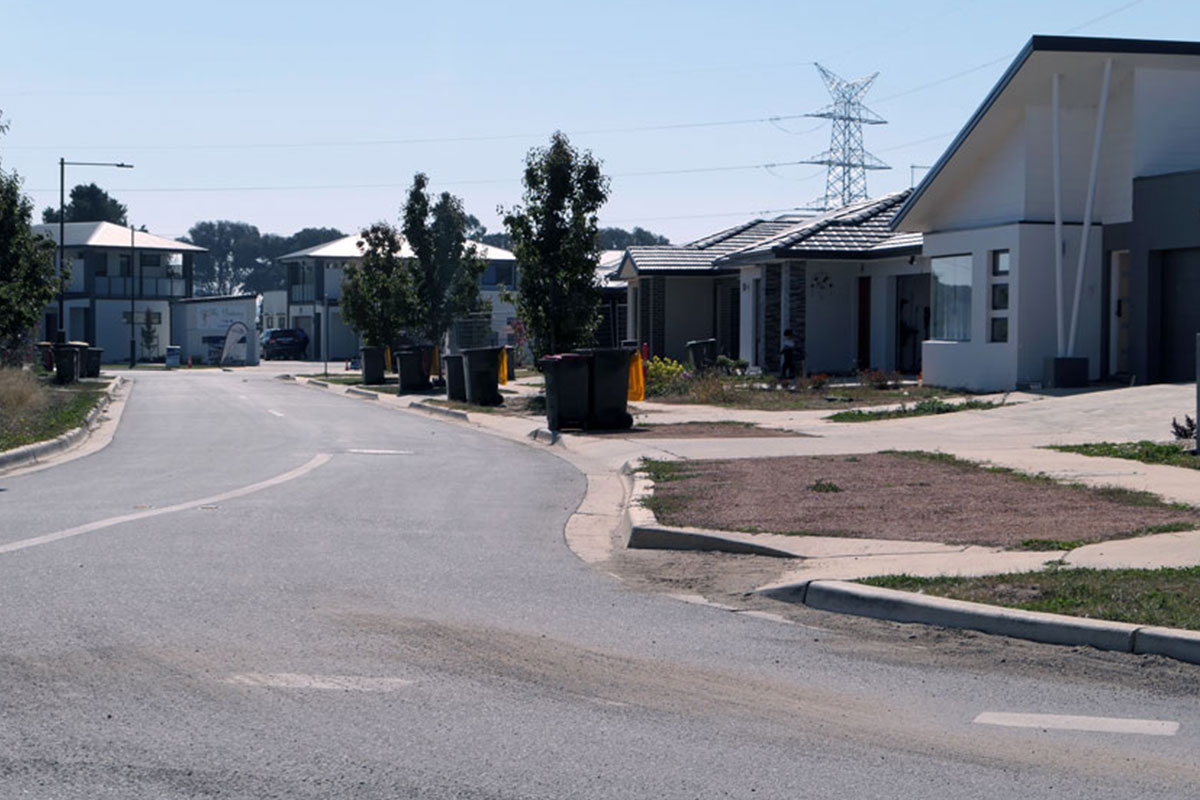 The article commences with the following:

“Take a drive to far west Belconnen and you will see what a new Canberra suburb is looking like. There’s not a lot of greenery nor is there much space for shrubbery to flourish.

One plus is that there are street trees. Every house has solar panels. And we can be assured that they will pick up a lot of solar as there are few trees at this stage to shade them.

When the first sod was turned there was a picture of the Minister for Photo-ops, Yvette Berry, in a high-viz jacket alongside the head of the Green Building Council. The message was that this development was to meet a high level of environmental and climate standards.

Any criteria would have to be highly contorted to even pretend that what you see meets contemporary requirements. It takes a lot more than solar to be energy efficient and environmentally secure.”

Ginninderry is ACT’s only 6 Star Green Star Community, the highest rating available under the Green Building Council of Australia’s national Green Star – Communities rating tool. Categories considered during the evaluation process include governance, liveability, economic prosperity, design, innovation and environment. The project is re-tested every 5 years and must report performance, and perform, in each of these areas at an exemplary standard to retain its 6-star rating.

Environmentally, Ginninderry has committed to preserving and enhancing the natural environment. 596-hectares of land adjoining the Murrumbidgee River and Ginninderra Creek has been planned for conservation, to retain and protect important species, ecological communities and sites with cultural significance. Urban development has been restricted to areas that have been heavily impacted by agricultural pursuits over the last 100 years (and the landfill). Within the urban areas so far, Ginninderry preserved 78% of all remnant trees during Stage 1 of development with over 80% set to be retained in Stage 2. This compares to a Canberra average tree preservation in new estates of 25%. Ginninderry also believes that one of the central features of any local community is its open spaces. The largest in the first neighbourhood of Strathnairn is the 2.7-hectare Paddy’s Park featuring a large playground, multi-use sports court, enclosed cricket nets, BBQ and picnic areas, amphitheatre and an abundance of open space for general enjoyment. This is over and above the numerous local parks provided within the suburb.

“Ginninderra Falls is to the west of the present development and remains within an environmental conservation zone. Requests from the Ginninderra Falls Association to ensure that there was a large enough buffer were largely sidelined.”

Following finalisation of the rezoning of the NSW component of the Ginninderry project land (known as “Parkwood”) in 2019, Ginninderra Falls and all of the associated Ginninderra Gorge high-value natural area is now within an “E2 environmental conservation” zoning. The Falls and Gorge will now be protected by this zoning which prohibits any activities that may damage the natural or cultural values. All of the land identified as having significant natural or cultural values is now included in this zone. To provide further protection, the new zoning includes a buffer zone (the conservation urban edge interface) within the future urban area where special protection measures are required to ensure no impacts on the conservation zone.

“Instead, up pops a new body—the Ginninderry Conservation Trust. Its governing body includes the developers, the government and community representatives.

The important conservation management work along Ginninderra Creek and the Falls should be undertaken for the longer term by the ACT and NSW governments and not left to property developers.”

The Ginninderry Conservation Trust was established to capture some of the economic benefits of the Ginninderry development and ensure they were appropriately invested in the protection, enhancement and appreciation of the cultural and environmental values of the area. It was developed following a long period of consultation with stakeholders which commenced in 2011, and in fact, its establishment and commitment to its funding was a requirement of the Commonwealth Government’s EPBC Act approval.

The Ginninderry Conservation Trust governance includes representatives from the ACT Government, the Yass Valley Council, the Aboriginal community, Ginninderry developers and the local community, with the Trust being chaired by an independent member.

Read more about the Trust and its Board Members here. The Ginninderry Conservation Corridor Plan of Management can be downloaded here, and various implementation progress reports can also be found on the Trust’s website.

“This is a suburb being built in the style currently favoured by developers and approved by the ACT government. There is too much monotonous grey and off-white with nothing resembling a touch of an architect’s creativity. The houses are squeezed on to blocks with little room for gardens and shrubbery front or back.”

Ginninderry attracts people with different budgets and lifestyle aspirations to create a vibrant and interesting community with products ranging from means-tested ‘Flexi-living’ homes to traditional freestanding blocks. Ginninderry has specific design guidelines that must be met to ensure each home contributes to a streetscape that upholds the project vision. Ginninderry also provides free front landscaping to each home.

“We have seen this before in other recent suburbs. The Labor/Greens government, as it has done with new suburbs for years now, raised expectations that things would be so much better. They haven’t provided a main shopping centre yet. Where have we heard that before?”

Ginninderry is a master planned community that will span 30–40 years and eventually be home to approximately 30,000 people. A shopping centre along with various other retail and community offerings will be delivered in the future. However, with Holt Local shops about 5 minutes away, Kippax Fair Shopping Centre 7 minutes away and Belconnen Town Centre 12 minutes away, Strathnairn is well serviced for a neighbourhood of its size. The Territory Plan variation that rezoned the Ginninderry site for urban development recognised the need for a staged approach to the provision of retail facilities and the need for a balance between existing nearby centres and new facilities; the Plan does not allow the introduction of a supermarket (and consequently a substantial shopping centre) to Ginninderry until 2025.

“The situation is that the government is a partner in the development while also the agency that approves development applications.”

The Project has secured a Commonwealth Government Strategic Assessment EPBC Act approval – the Commonwealth Government is not a partner in the development of the project. All local and regional development at Ginninderry is subject to the approval processes set out in the Planning and Development Act 1987, as is all development in the ACT, outside National Areas (and NSW and Yass Valley Council planning provisions will also control future development in NSW). Development proposals in the ACT are assessed and approved by the ACT Planning and Land Authority in the same way as the Authority assess all development applications whether lodged by a Government agency or the private sector. All development proposals must comply with the provisions of the Territory Plan, otherwise, they cannot be approved.

Ginninderry openly invites Paul Costigan to The Link to discuss the project and its vision further.