Whether you are a seasoned angler or new to fishing, Canberra offers a great variety of fishing opportunities, styles and locations. Contrary to popular belief, Yellowbelly, Murray Cod, Trout, Redfin, Carp and a handful of endangered fish are all present within 50kms of Parliament House.

Whilst the majority of Canberra’s urban lakes and rivers are dominated by the introduced Carp and Redfin, they provide an excellent opportunity for new and experienced anglers alike to catch a fish, have some fun and hone their skills. Regular stocking programs of Yellowbelly and Murray Cod in the lakes also give anglers the opportunity to tussle with a native fish which grow fat on the abundant food supply. Further afield there are wild fish inhabiting the Murrumbidgee and lower Molonglo Rivers, and trout in the Cotter River.

Of course, if you don’t happen to catch anything, the Bush Capital is blessed with so much wildlife that you are likely to take home a fond memory long after the rods are packed away in the garage. Platypus, Rakali (native water rats), wombats, echidnas, an array of woodland birds, swans, cormorants and yes, snakes, are all common sights. A fishing license is not required in the ACT, however, it is your duty to familiarise yourself with the rules and regulations. Tight Lines!

At opposite ends of the city, Lake Tuggeranong and Lake Ginninderra offer similar fishing opportunities to Lake Burley Griffin and are ideally suited to land-based anglers, kayaks and boats. Carp and Redfin are the dominant fish caught but repeated stocking efforts are increasing native fish numbers.

At Lake Ginninderra, the deeper points and weedy edges are worth a try, more specifically the rock wall in front of the restaurants and fast-food chains, the police jetty and the dam wall. The parks and beaches are popular for Carp fishing.

At Lake Tuggeranong, lure anglers might like to target the willows and rock walls near the college, the deeper water near the Learn to Ride Centre, around the skate park, along the dam wall or under the bridge.

You can use a petrol-powered boat on Lake Ginninderra and Lake Tuggeranong, but a permit is required from Access Canberra and speeds are restricted to under 10 knots (18.5 km/h).

At the centre of Walter Burley Griffin’s design for Canberra is the expansive Lake Burley Griffin (LBG). Fringed by the parliamentary triangle, the two iconic bridges and the imposing museums and galleries, LBG is where many locals and visitors first wet a fishing line. The best spots in LBG for Carp are typically the sandy beaches (bring a chair and a rod holder), while Redfin often patrol the rock walls and weedy edges. Popular spots for targeting Yellowbelly and Murray Cod are the deeper rocky and timbered areas such as Black Mountain Peninsula, Lady Denman Drive below Black Mountain Tower, Blue Gum Point and the old Molonglo River channel (now flooded).

LBG has great access for land-based anglers with countless car parks and access points. For kayaks and boats there are several boat ramps around the lake, however, boats must be powered by electric motors and have a permit from the National Capital Authority before entering the water.

A short 30-40 minute drive from most parts of Canberra, Googong Dam is Canberra’s premier freshwater fishery. Relatively clear water, a largely forested catchment with little urban development and the absence of Carp has resulted

in an excellent fishery for Yellowbelly, Redfin, some truly enormous Murray Cod and the occasional Trout. There is only one boat ramp at the northern end for trailer boats and kayaks. Fishing from the bank is largely restricted to this area, or the far southern end accessed from London Bridge Road. As the water level fluctuates, baits and lures fished around the sunken trees and above the aquatic weeds is a good way to find fish. Boat and kayak anglers with a depth sounder may be able to locate schools of Redfin and often the native fish are not far away!

Googong Dam forms part of Canberra’s water supply and is only open to anglers during daylight hours each day and may be closed during total fire bans or extreme weather.

No petrol-powered boats are allowed and a permit is required for electric powered boats from Access Canberra in addition to the permit from National Capital Authority.

A fishing license is also required in NSW.

The Cotter River is ostensibly Canberra’s only fishery for Rainbow and Brown Trout with crystal clean, cool, clear water running down from the mountains. The endangered Macquarie Perch and Two-spined Blackfish also live in this river and must be released unharmed

if accidentally caught. Most anglers choose to hike or wade along the river casting lures or flies as bait fishing is not permitted. Access is from Brindabella or Bendora Roads west of Canberra, roughly a 25 to 45 minute drive.

Many sections of the Cotter River and the Cotter, Bendora and Corin Dams are closed to fishing as they form part of Canberra’s water supply and are home to multiple species of endangered fish. Familiarise yourself with the rules before heading out. Phone reception is very limited and there are many snakes, so please plan accordingly.

Killing so called ‘pest fish’ and leaving them on the bank or in public rubbish bins creates a terrible smell, attracts pests such as rats and foxes and ruins the amenity for other lake and river users. Sadly, recreational angling is not going to have a tangible impact on the total numbers of these fish. Instead, you are allowed to return them so long as it is back into the waterway in which they were caught. Alternatively, Carp fillets make excellent bait for the coastal fish species as well as fertiliser for the veggie garden. Redfin are arguably the best freshwater eating fish with sweet white flesh that is well suited to many styles of cooking.

The decision whether to eat fish from ACT waterways often comes down to two questions:

Is it safe?
Whilst all Canberra lakes are essentially urban stormwater collecting ponds that come with a degree of urban run-off and litter, all of the lakes’ fish comply with relevant food standards. As part of Canberra’s water supply, Googong, the Cotter River and to a lesser extent the Murrumbidgee River all have excellent water quality and people regularly eat the fish from each. Ultimately it comes down to your own preference.

Is it harming native fish numbers?
The once-abundant native fish stocks across south east Australia have been significantly reduced by the construction of dams, the impacts of urban development and agriculture, overfishing and the introduction of exotic fish species. To aid population recovery of wild fish stocks, many anglers choose to keep Redfin or those hatchery-raised fish from the lakes for the table and release wild fish from the rivers to continue to breed. Regardless of where they are caught all Murray Cod larger than 75cms must be released in the ACT.

What You Can and Can’t Catch

There are four endangered fish species in the ACT that must be released unharmed if they are caught.
– Trout Cod
– Two-spined Blackfish
– Macquarie Perch
– Silver Perch
For all other fish, strict bag, size limits and closed seasons apply, and it is up to you to inform yourself of the rules in each river and dam. 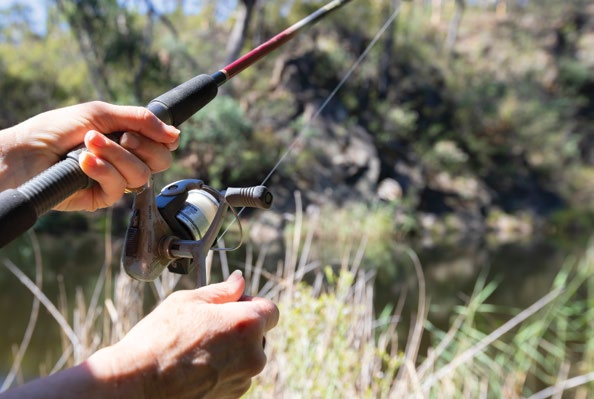