After significant consultation, the name Ginninderry has been chosen for a new community across the western boundary of the ACT and NSW being developed by a joint venture between the Land Development Agency and Ginninderry Joint Venture.

West Belconnen/Parkwood had been the working title for the development. Over the past two years, the project has investigated the name for the new community through the project’s People and Place Group (PPG), a forum of key local stakeholders.

In parallel with this project-based consultation mechanism, the project has also sought regular advice from the ACT Place Names Committee (PNC), the government authority within the Environment and Planning Directorate.

The project also consulted closely with the Australian National University and the Australian Institute of Aboriginal and Torres Strait Islander Studies and the local Indigenous Community and taken into account their linguistic records.

Ginninderry is derived from an Aboriginal word meaning ’sparkling’ or ‘throwing out little rays of light’. It symbolises the creek that flows through the district and is a fitting acknowledgment of both the Indigenous and European heritage of the area.

Its reference to the stunning river corridor that runs through the land has both historical provenance and contemporary relevance.

The first written record of the word Gininin-ginin-derry was circa 1829 on an Aboriginal king plate bearing the name of John Langdon and inscription ‘Mickey King of Gin and Gin and Derry’. King plates (also called breastplates) were a form of regalia used in pre-Federation Australia by white colonial authorities to recognise those they perceived to be local Aboriginal leaders. John Langdon was the holder of land on Ginninderry Creek at that time.

The next record of the word Ginninderry was in a letter to the Surveyor-General on 6 June 1829 where [surveyor] Dixon mentioned that Mr Docker traced the ‘Ginningderry Creek’ from the Murrumbidgee River to its rise. (Gillespie 1992: 8)

Along with a number of other records, references to Ginninderry can be found in newspapers as early as 1839. In the late 19th century the district was well thought of for horse breeding, while the Goulburn Herald in May 1898 reported the Ginninderry cricket team had failed to overcome its Gundaroo rivals.

Ginninderry has had various recorded iterations over time including Ginnin-ginin-derry, Gingininderra and the more commonly used Ginninderra.

These first known spellings provide evidence that the surveyors made a judgement, pronouncing the ‘y’ as a short ‘i’ sound.

The compilation of historical records highlights there were long and short versions of Ginninderra with fluctuations between the word ending in ‘y’, ‘a’ and ‘ing’. 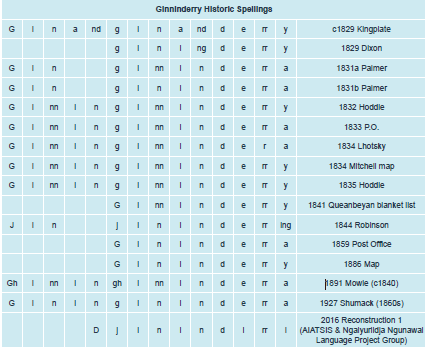 Today, work continues with the AIATSIS Centre for Australian Languages and the Ngaiyuriidja Ngunawal Language Project Group to analyse historical records of the language, to produce materials that will support its revival. A key part of this process has been the development of a spelling system that suits the Ngunnawal (the English spelling) language — in this system ‘Ginninderry’ would be written as ‘Djinindirri’, although many spellings may change as deeper insights into the language are gained. Ongoing consultation with the wider Indigenous community will continue to inform the development of the writing system and of other materials, with draft documents targeted for completion in 2017.

While the first stages of Ginninderry will take shape within the District of Belconnen in the ACT, it’s planned that the community will eventually extend across the border into NSW (subject to rezoning approval). In 1837, all this land was granted to the explorer Charles Sturt. Ginninderry follows a historic precedent in reuniting the areas on both sides of the border.