Intergenerational living has been commonplace around the world for centuries. But could it solve big issues facing modern families today?

During Canberra’s COVID-19 lockdown, many of my Millennial peers struggled with a lack of connection to their extended families. But not me. In fact, it only took me 30 steps to visit my parents, sister and my grandmother. This is because my family lives in an intergenerational home, a situation that perfectly fitted the stranger-than-fiction reality of living through a pandemic.
While we shielded my immunocompromised grandmother by buying and sanitising her groceries, we were able to interact with her in-person by setting up chairs at opposite ends of the backyard. Meanwhile, I was able to support my younger sister as she tackled Year 12 online, and my mother’s cooking supported me through some challenging weeks of remote working. So, should more families consider intergenerational living? Gina McGeoch thinks so. Gina and husband James are empty nesters with three grown children who have recently welcomed their first grandchild. But it won’t stay empty for long—they’ll be welcoming Gina’s parents Joe and Betty into the nest when their new home is built later this year. 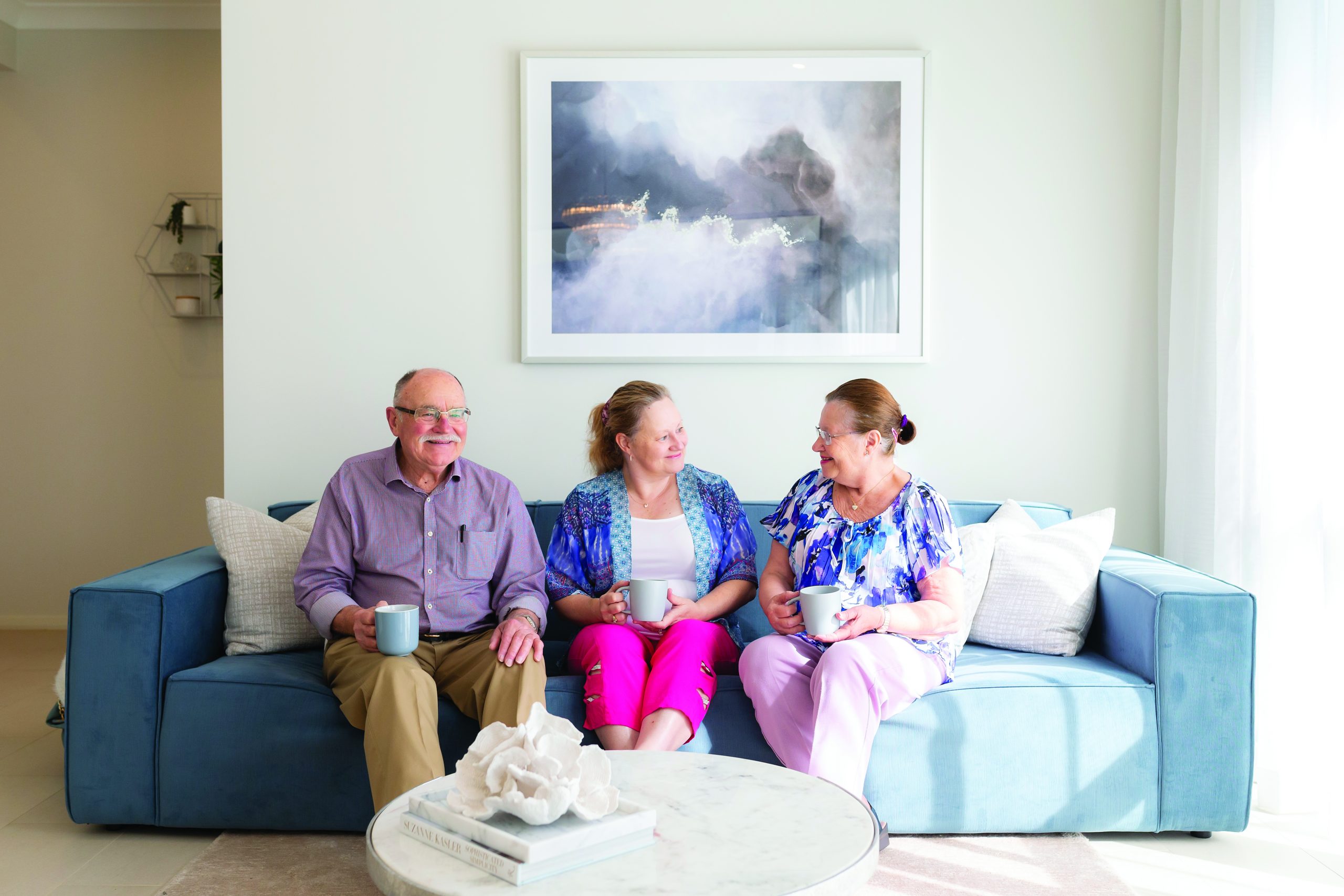 For Gina and her family, the catalyst for this new chapter was a difficult one. Gina’s father Joe has faced uphill health battles for some time and the drive to visit him and Betty in the Southern Highlands became too difficult. After moving Joe and Betty to assisted living in Canberra, the decision to join forces and build a new home was an easy one for Gina.

“We were able to find a plan through McDonald Jones Homes and tweak a few things to make it work, so we’re happy and [my parents] are happy.”

Gina and James’ new home will be a single storey residence with private space for both couples. Joe and Betty’s section will sit further back on the block, connected by a shared laundry and the floorplan will offer flexibility to shift living arrangements into the future.

“Having my parents under my roof helps me keep an eye on them and give them the assistance that they require as they grow old gracefully,” says Gina. “They can still have people come in under a home care package to help with personal care whilst maintaining their independence.”

Gina and her family have also embraced the futureproofing of Ginninderry itself by adding solar panels to their new home.

While Gina’s home will become one of the newest houses in one of Canberra’s newest suburbs, the concept of intergenerational living is far from young.

A 2001 survey by the Japanese Cabinet Office found that 58% of people aged 60 and over lived with at least one of their children that year (a stark contrast compared to 17% in the United States and 15% in Germany)1, while Balinese families traditionally share their walled family compound with multiple generations. In this era of climbing house prices and COVID-related uncertainty, intergenerational living will become a necessary choice for some families— but it’s not just about the cost of living. Dr Edgar Liu, Adjunct Senior Research Fellow at the City Futures Research Centre at the University of New South Wales, has been studying people living intergenerationally for almost a decade and says that care is also a driving factor.

“Survey participants told us ‘I can’t bear the thought of sending my mother to a home’,” says Dr Liu. “Even before the pandemic there was the Royal Commission into Aged Care and there were horror stories about how the industry was doing. So it’s no surprise that people are moving to this arrangement to provide this kind of care.” Gina can relate. “It’s so we can take care of them until their last days,” she says. But it’s not just care of the elderly that intergenerational living provides—it could also help alleviate another modern crisis; the so-called ‘loneliness epidemic’. 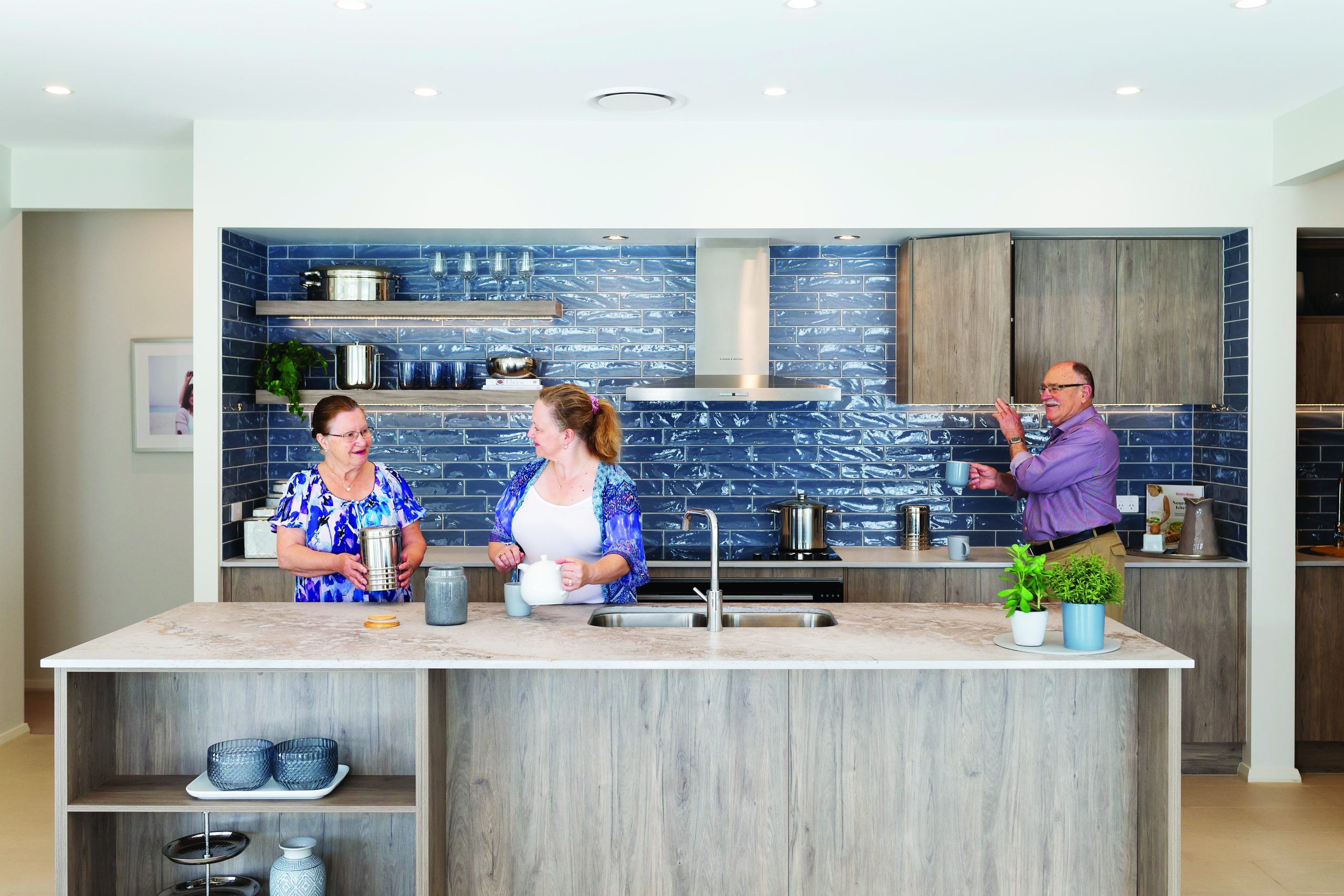 “Quite often our participants say things like ‘It’s just good to know someone else is there… it just grounds you a little bit more’,” says Dr Liu. “So intergenerational living certainly could be a solution to [loneliness].”

Dr Liu also points out that intergenerational living fits with the modern workforce, with younger people staying at university for longer due to employers expecting more qualified candidates and the rise of the gig economy. But intergenerational living is also a chance for one more dream home, even later in life. “My dad has always had a fascination with the Brindabellas—he actually wanted a photograph of it on a canvas and couldn’t find one,” says Gina.

Needless to say, once Joe laid eyes on the sprawling vistas surrounding Ginninderry, there was no going back.